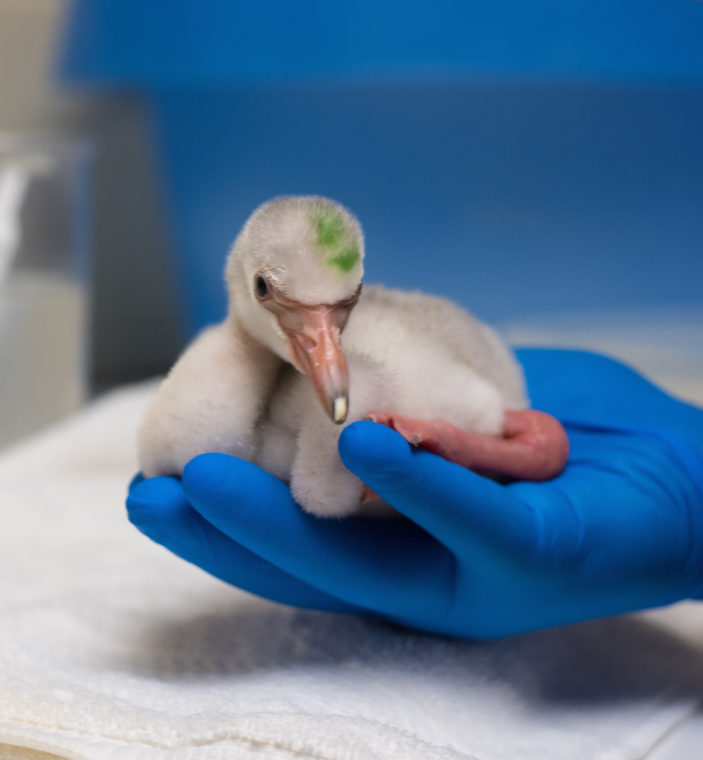 The Sacramento Zoo is thrilled to announce the hatch of five American flamingo chicks. The eggs hatched between June 28 and July 18. The eggs were collected from the flock as they were laid and artificially incubated to ensure hatching success. Visitors can catch a glimpse of one or more of the flamingos daily at 10:30 a.m. at the Dr. Murray E. Fowler Veterinary Hospital.

Currently, the flamingo chicks are being hand-reared behind-the-scenes by the zoo’s dedicated veterinary and animal care teams. Around-the-clock care for the chicks includes feedings, health checks, growth monitoring and regular exercise such as daily walks to strengthen their delicate legs. Once the chicks are large enough to thrive on their own, they will be introduced to the flock and live on the lake.

The Sacramento Zoo is home to 36 adult American flamingos. The last time a flamingo egg was laid and then successfully hatched at the zoo was in 1999. Prior to the recent hatchings, the zoo has hatched 28 flamingos in its 90-year history and has housed American flamingos since 1966. One of the original eight flamingos that arrived in 1966 still resides on the zoo’s lake.

American flamingos, also known as Caribbean flamingos, are tall, large-bodied birds with long necks and small heads. The American flamingo is the brightest-colored and one of the largest of six species of flamingos and is native to South America and the Caribbean with a small population in the Galapagos. Flamingos lay their eggs on a muddy mound that the pair builds, and both parents care for the chick. Although adult flamingos are pink, the chicks hatch with white down that change to grey feathering prior to their adult coloration coming in. The birds’ pink coloration comes from pigments in the aquatic organisms that they eat.

To keep up to date with the flamingo chicks progress, visit the Flamingo Chick webpage.

In the video below you can see the younger chicks at first then the older chick in his pool eating solid food, playing with his stick and learning to take a bath.