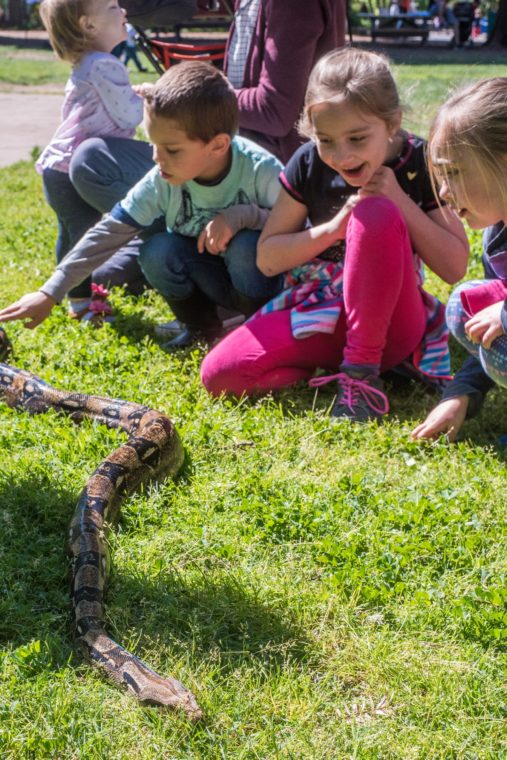 We are saddened to announce that Fideo, our red-tailed boa, was humanely euthanized on Friday, November 17. At the age of 21 Fideo was the largest snake residing at the zoo and was an animal ambassador in the education department. She helped change the minds and hearts of many who did not think they liked snakes until they were fortunate enough to spend time with her.

In recent years Fideo had developed periodic loss of appetite, but under the care of veterinarians and zookeepers she would always regain it. Over the last month she had another bout of appetite loss that resulted in assisted feedings. The feedings did not bring her appetite back and she began losing a significant amount of weight. Veterinarians, who had been closely monitoring her condition, conducted a biopsy which showed that Fideo also had a viral infection known to cause weight loss in snakes. As the virus cannot be treated and she was not responding to symptomatic treatment, the difficult decision to humanely euthanize her was made by her caretakers and the Sacramento Zoo’s veterinary team.

Fideo was born in 1996 and arrived at the Sacramento Zoo in 2011 to be an animal ambassador in the Sacramento Zoo’s Interpreter Center. Fideo, which translates loosely to “noodle” in Spanish, got her name for her laid-back personality. Fideo knew that if she laid like a wet noodle her caretakers would do all the work of supporting her body for her. She delighted children and adults alike as the ‘big snake’ on ZooMobiles, in wildlife stages, and animal encounters. She even made several appearances at local news stations over the years. The loss of Fideo is felt deeply by those who knew and worked with her.

The red-tailed boa constrictor species is native to the woodlands, forests, and rainforests of Central and South America. They are a larger snake that is listed as Endangered and is often found in the pet trade. Although they are adaptable to a range of habitats, the loss of rainforest and pristine temperate forests in South and Central America continues to put pressure on their survival in the wild.