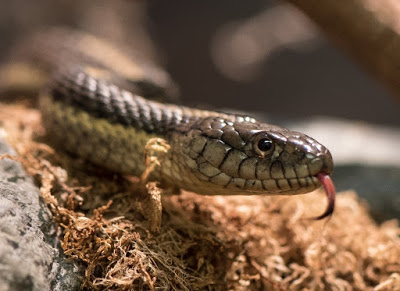 Did you know that your local Sacramento Zoo is an active participant in animal conservation right here in central California? In 2017, the zoo’s veterinarians examined 81 wild giant garter snakes, a record-breaking number, right here at the Dr. Murray E. Fowler Veterinary Hospital, directly aiding in the recovery process of this local species.

While we often think of implanting radio transmitters into people as a futuristic technology, it is the latest scientific trend for tracking giant garter snakes. Using nonharming traps, biologists capture wild giant garter snakes and, with the help of Sacramento Zoo and UC Davis veterinarians, complete comprehensive medical exams on each snake. Some snakes are implanted with radio transmitters. The snakes are then returned to the wild, where the radio transmitters allow researchers to track movement and other behaviors. The information obtained helps biologists create better homes for the snakes and screens for diseases from the changing environment.

When injured giant garter snakes are discovered, the California Department of Fish and Wildlife contacts the zoo so the snakes can be examined, treated and returned to the wild. One female was injured too severely to be able to hunt in the wild; she now lives at the Sacramento Zoo. The snake is also used by CDFW and USFW for training biologists to recognize this state threatened snake.

The Sacramento Zoo is proud to work with UC Davis, United States Geological Survey, United States Fish and Wildlife Services, and the California Department of Fish and Wildlife to aid in their recovery process. Want to do more for this native species? Take time to learn more about these harmless snakes, leave snakes as they are in the wild, support wetland conservation, and reduce water usage to further help giant garter snakes.

The Sacramento Zoo’s giant garter snake was recently photographed by National Geographic photographer Joel Sartore for his Photo Ark Project, a groundbreaking effort to document species before they disappear—and to get people to care while there’s still time.