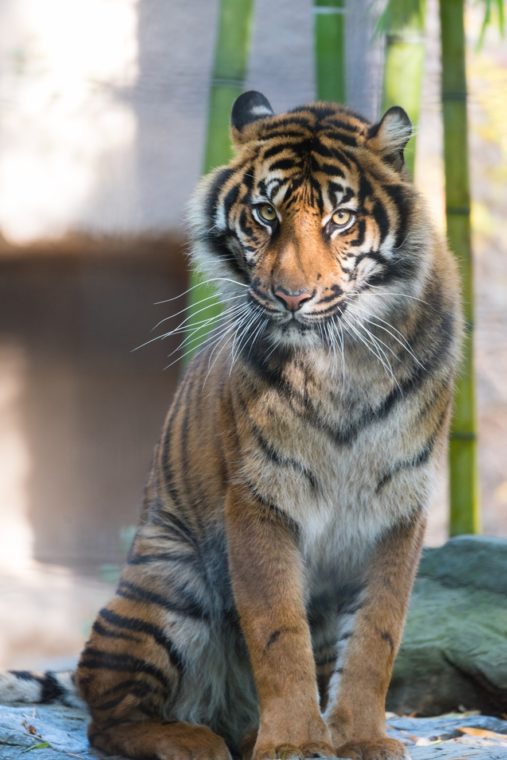 4-year-old Jillian was born at the San Francisco Zoo where she lived until last February when she moved to the Sacramento Zoo based on a recommendation from the Association of Zoos and Aquariums(AZA) Sumatran Tiger Species Survival Plan® (SSP). Just like people, animals including Jillian, go through a period of transition after a move. Some settle in very quickly and in rare instances, they may have a more challenging time adjusting to their new surroundings. Over the last year all of Jillian’s needs have been met. Her caretakers have worked diligently to feed her favorite treats, supply her with ample toys and enrichment, and help her settle in but she has not thrived as we would like to see.

While Jillian has been well cared for, she has never quite settled in as we would expect and want. As it became clear that Jillian was having a more difficult time, one of the biggest indicators of her unease was her inconsistency with shifting from one area to another. Shifting is important because it helps keepers care for an animal. When an animal voluntarily goes inside, outside or moves from one space to another, zookeepers can clean their exhibits, provide enriching changes to their environments, perform noninvasive healthcare checks, and safely care for the animal.

Sacramento Zoo staff has coordinated site visits with staff from the San Francisco Zoo to evaluate and adjust care plans for Jillian. Zoo staff have also been utilizing consultation services with a veterinarian behaviorist from the UC Davis School of Veterinary Medicine. The zoo has included recommendations from the behaviorist in Jillian’s care including the unusual length of prescribing Jillian an anti-anxiety medication. Along with these efforts, Sacramento Zoo staff has also been in consultation with the Sumatran Tiger SSP coordinator, and with other tiger keepers and curators throughout AZA for input on best care plans.

“The SSP is supportive of the move because we believe it is in the best interest of the individual animal and we will work with both facilities to meet their needs and the needs of the Sumatran tiger population,” said Sumatran Tiger Species Survival Plan Vice Chair, Karen Goodrowe Beck, Ph.D.

Sumatran tigers are critically endangered and found only on the Indonesian island of Sumatra off the Malaysian Peninsula. Fewer than 500 Sumatran tigers are believed to exist in the wild and approximately 320 live in zoos around the world. The Sacramento Zoo participates in the Sumatran Tiger Species Survival Plan®, coordinated by the Association of Zoos and Aquariums. SSPs are cooperative conservation programs designed to maintain genetically viable populations of animals in human care, and to organize zoo and aquarium-based efforts to preserve the species.

Face coverings are recommended outdoors and required indoors. By entering the zoo you are attesting to your compliance with this policy.