Misha gave birth to two cubs on May 6. Mother and cubs were and are closely monitored over a closed-circuit video system. Several days after birth, one cub began to decline in health and passed away. Initial exams indicate the cub suffered from severe birth defects, including a cleft palate. A full necropsy (animal autopsy) is being performed at UC Davis School of Veterinary Medicine.

Misha and the remaining cub continue to be closely monitored by staff through closed-circuit video. The pair are being housed in an off-exhibit maternity den where mother and cub can bond and allow for proper nursing and care in a quiet space.

Veterinary staff performed a brief neonatal exam on May 10. At that time the cub weighed 1.35 pounds and showed normal signs of growth and development including a strong heart and lungs. Dr. Jenessa Gjeltema, Associate Veterinarian who performed the exam said, “I was pleased by how robust and vibrant the cub appeared at its first evaluation, and we look forward to seeing how he continues to grow and develop.”

Through consistent video monitoring, veterinary and zookeeper staff have observed that Misha is exhibiting exceptional care of her cub and displaying positive maternal behaviors at this stage. 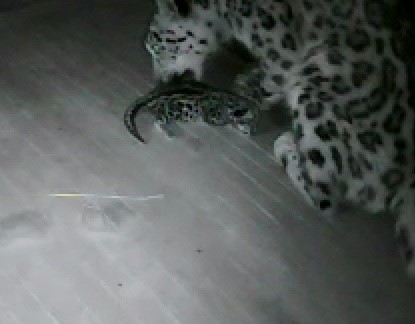 Misha and the cub will remain off exhibit until later this summer when the cub is routinely leaving the nest area and coordinated enough to navigate his habitat and make his public debut. The Sacramento Zoo will continue to provide updates on the progress of the zoo’s newest resident.

This breeding was carefully planned and recommended by the Association of Zoos and Aquariums (AZA) Snow Leopard Species Survival Plan® (SSP). Any snow leopard birth is significant due to the species’ declining population in the wild.

The Sacramento Zoo is an accredited member of the Association of Zoos and Aquariums and participates in the Snow Leopard Species Survival Plan® by following breeding recommendations and increasing awareness of the problems facing this species. Snow leopards are vulnerable due to poaching, loss of prey, and the fragmentation of habitat. The Sacramento Zoo also supports snow leopard conservation, partnering with organizations such as the International Snow Leopard Trust and Snow Leopard Conservancy by donating funds for educational materials and conservation programs in the range where snow leopards are found.

DUE TO COVID-19 PRECAUTIONS

We will continue to update our website and social media platforms regularly as this situation evolves. Thank you, our community, for your support.
Read more