As the zoo’s oldest animal, at a spry 91-years-old, Herkimer the desert tortoise is a favorite amongst zoo staff and visitors alike. A key component to making sure Herkimer is healthy and fulfilled in his long life, is his annual exam. Sacramento Zoo veterinarians and staff examined Herkimer recently at the Dr. Murray E. Fowler Veterinary Hospital, performing blood work, taking x-ray images of his internal organs, checking his heart rate using Doppler ultrasound equipment, checking his respiratory rate and examining his eyes, nose and mouth. This annual exam ensures Herkimer is receiving preventative treatment that will allow him to continue to thrive.

Each of the nearly 500 animals at the Sacramento Zoo, from the curly-hair tarantula to the reticulated giraffe, receives an annual exam in addition to daily checks by the keeper staff. The zoo’s partnership with UC Davis School of Veterinary Medicine enables us to provide the best medical care for our animals and provides veterinary students with invaluable experience in the world of zoological medicine. Herkimer’s exam was attended by Alison Mott, Registered Veterinary Technician, as well as Associate Veterinarian, Dr. Jenessa Gjeltema and two trainees from UC Davis School of Veterinary Medicine: Alyssa Capuano, zoo medicine student, and Sarah Ozawa, a veterinary resident.

Herkimer’s story began well before his arrival at the Sacramento Zoo. Local lore has it that Herkimer arrived in Sacramento in the 1920’s in a Studebaker. His name (though we cannot confirm) may have come from the town of Herkimer, New York, the same town in which William Land was born in 1836. After being passed down for several generations, the family donated Herkimer and his female companion, “Grandma”, to the Sacramento Zoo in 1991. Since then, the desert tortoise has been listed as a threatened species, protected under the U.S. Endangered Species Act, as well as other protections under State and Federal Laws. It is illegal for anyone to take a tortoise from the desert, or to buy or sell one. In California, anyone who has possession of a desert tortoise must have a special permit, which the zoo acquired when it agreed to take and care for Herkimer and Grandma in the early 1990s.

Regardless of his origin story, Herkimer is one robust and healthy tortoise. Weighing in at 7.56 kilograms (16.66 pounds), his herbivorous diet consists of daily yams, beets, carrots, broccoli and greens, but his favorite treats are yellow dandelion flowers, grapes and strawberries. You can often find him walking around the lawn near the Interpretive Center amphitheater, looking for the choicest dandelion flowers.

The next time you visit the zoo, be sure to visit Herkimer during one of our Wildlife Stage Shows – or he may just be outside munching on some dandelions. And on weekday mornings, stop by the Veterinary Hospital viewing windows, where oftentimes you’ll see one of the zoo’s nearly 500 animals receiving their annual check-up, just like Herkimer. 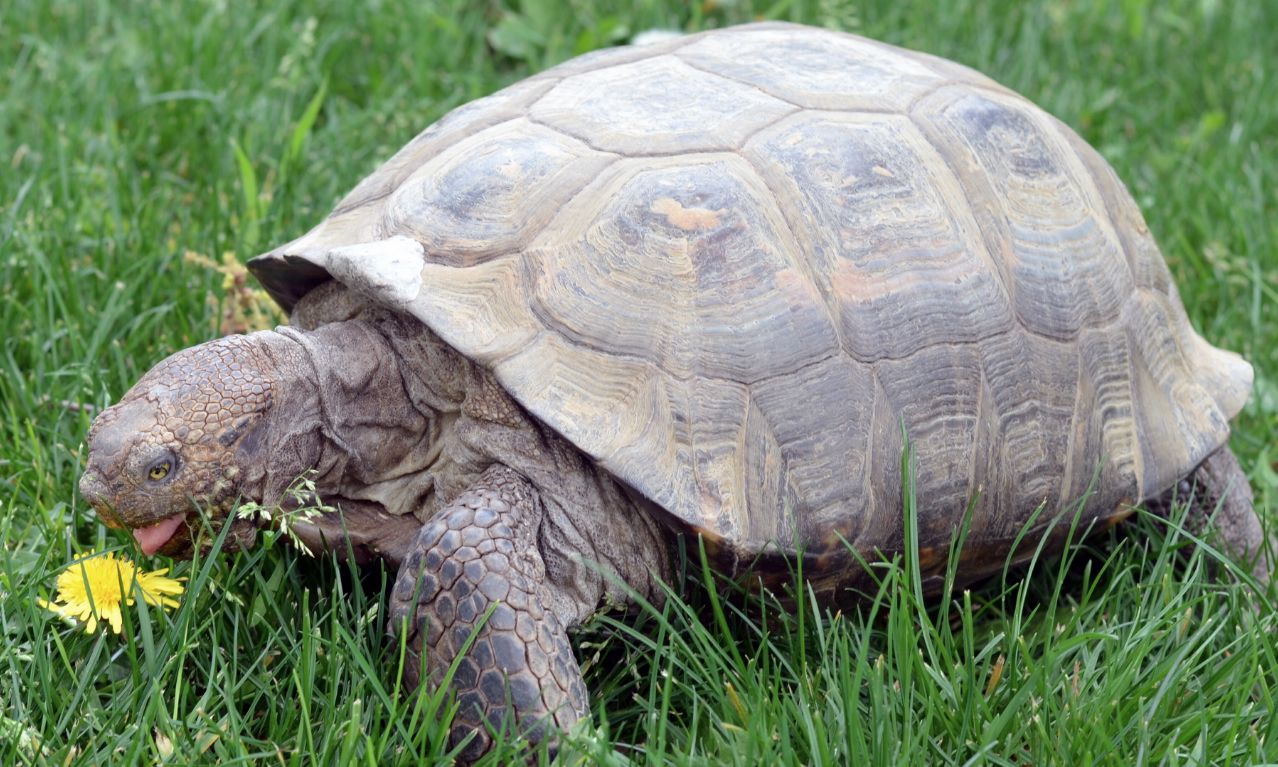