The Sacramento Zoo is saddened to announce the loss of Rori, an active and vibrant one-year-old Wolf’s guenon after a short battle with a respiratory infection. A full necropsy (animal autopsy) will be performed at the UC Davis School of Veterinary Medicine.

Early last week, the zoo’s veterinary and animal care teams observed Rori displaying abnormal behavior on exhibit. Rori was taken to the Sacramento Zoo’s Dr. Murray E. Fowler Veterinary Hospital for treatment and care where he received a thorough physical examination with radiographs, ultrasound, blood tests and screening for infectious diseases.  Rori was diagnosed with a respiratory infection and was treated with fluids, anti-inflammatory medications and antibiotics and remained in the veterinary hospital for round-the-clock monitoring and treatment of his condition.

On Friday, caretakers noticed Rori’s condition had deteriorated. The veterinary team responded with intensified care, transferring Rori to a warm incubator to supply oxygen and starting additional treatments, but Rori subsequently passed away.

“Rori was so special and a privilege to watch grow up,” said primary primate keeper Andrea Haverland. “His loss is so difficult and impactful. Only 28 Wolf’s guenons live in human care in the United States currently and we have three of them here at the Sacramento Zoo.”

Currently, the rest of the troop is healthy and behaving normally. Caretakers have been and will continue to closely monitor the troop for illness. While Rori’s absence will alter the hierarchy within the troop, we don’t anticipate significant changes in the group’s behavior or demeanor. The Sacramento Zoo is home to three other Wolf’s guenons — Mimi and Eddie, the adult pair, and their one remaining offspring: Zuri, born in 2013.

Wolf’s guenons are native to central Africa where they inhabit dense forests and forage for fruits, seeds and an occasional insect. Forming loose family groups in the wild, these monkeys are even known to spend time with other primate species including bonobos, colobus monkeys and other guenon species. A larger mixed-species group may mean that there are more eyes on the lookout for predators, and many guenons have learned to recognize other monkeys’ alarm calls so that they know how to respond correctly if a neighbor spots a leopard or eagle.

The nonprofit Sacramento Zoo participates in the Association of Zoos and Aquariums’ Species Survival Plan® program for the Wolf’s guenon species. The focus of this plan is captive breeding and educational awareness to prevent the extinction of this species. 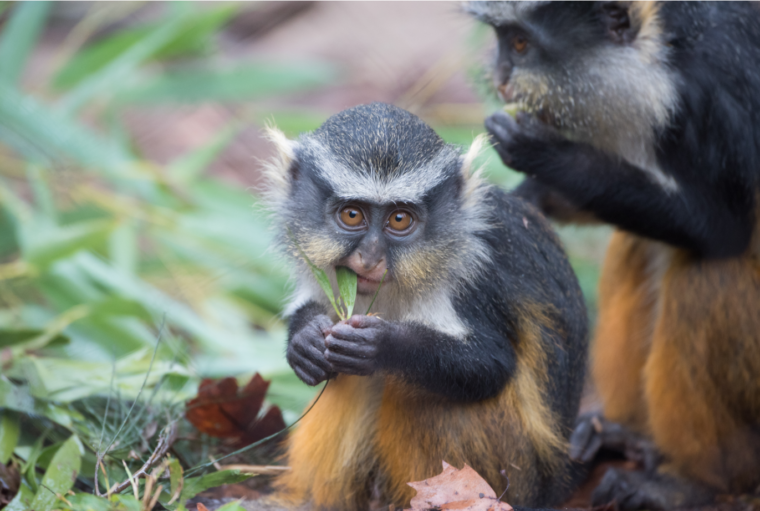