The Sacramento Zoo supports local and global conservation efforts, including one of our 2018 Quarters for Conservation recipients: foothill yellow-legged frogs. This species has seen a remarkable decline in numbers in recent years and is now a candidate for federal protection under the Endangered Species Act.

The objective of this conservation project is to restore and save a native California species and give it legs to thrive and repopulate in the wild. Through this conservation initiative, the Sacramento Zoo is helping with a population enhancement project in the region to increase population size and hopefully restore this species. Individually, we are working with the Rock Creek-Cresta Foothill Yellow-legged Frog Technical Group to restore foothill yellow-legged frog populations in the Plumas and Butte county areas of the Feather River; which is the only place in the world this species inhabits. This project is vital because the species is croaking in record numbers due to human habitat encroachment in important breeding sites. Without our intervention, this native species would become extinct in a matter of years.

Courtney Silver, a member of the Rock Creek-Cresta Foothill Yellow-legged Frog Technical Group said, “with the help from funding from the Sacramento Zoo we have been able to raise tadpoles into adulthood in protected cages in their native habitat and then release them to join the existing populations in hopes that they reach breeding age and can increase their population size. Without this funding, our project would not have been possible.”

In addition to monetary support, the Sacramento Zoo has sent staff volunteers to participate in restoration and conservation fieldwork. In the field, volunteers and program leaders are using a simple method of restoration: laundry baskets topped with mesh, secured with paperclips, and filled with rocks and tadpoles, submerged in the rivers which these frogs inhabit. The stones lining the baskets provide weight to keep the incubators submerged as well as a natural food source for the tadpoles because of the algae supply they provide.

Last year, two zoo staff members, including myself and a zookeeper, traveled to Butte County’s Feather River to lend a hand in restoration, tracking, inventory and release of hundreds of foothill yellow-legged frogs. Our early morning started with a cold swim across a particularly fast-running portion of the Feather River off Highway 70, just below the Poe Dam. Once across the river, the zoo team and Colin Dillingham, a district wildlife biologist for Mt Hough Ranger District in the Plumas National Forest, started inventory on the tadpoles and frogs. We inventoried the frogs in each basket, collected the ones that were of appropriate size (full legs and minimal tail), replaced the rocks for a fresh food source, and released the frogs in two portions (about a mile apart) of the Feather River. 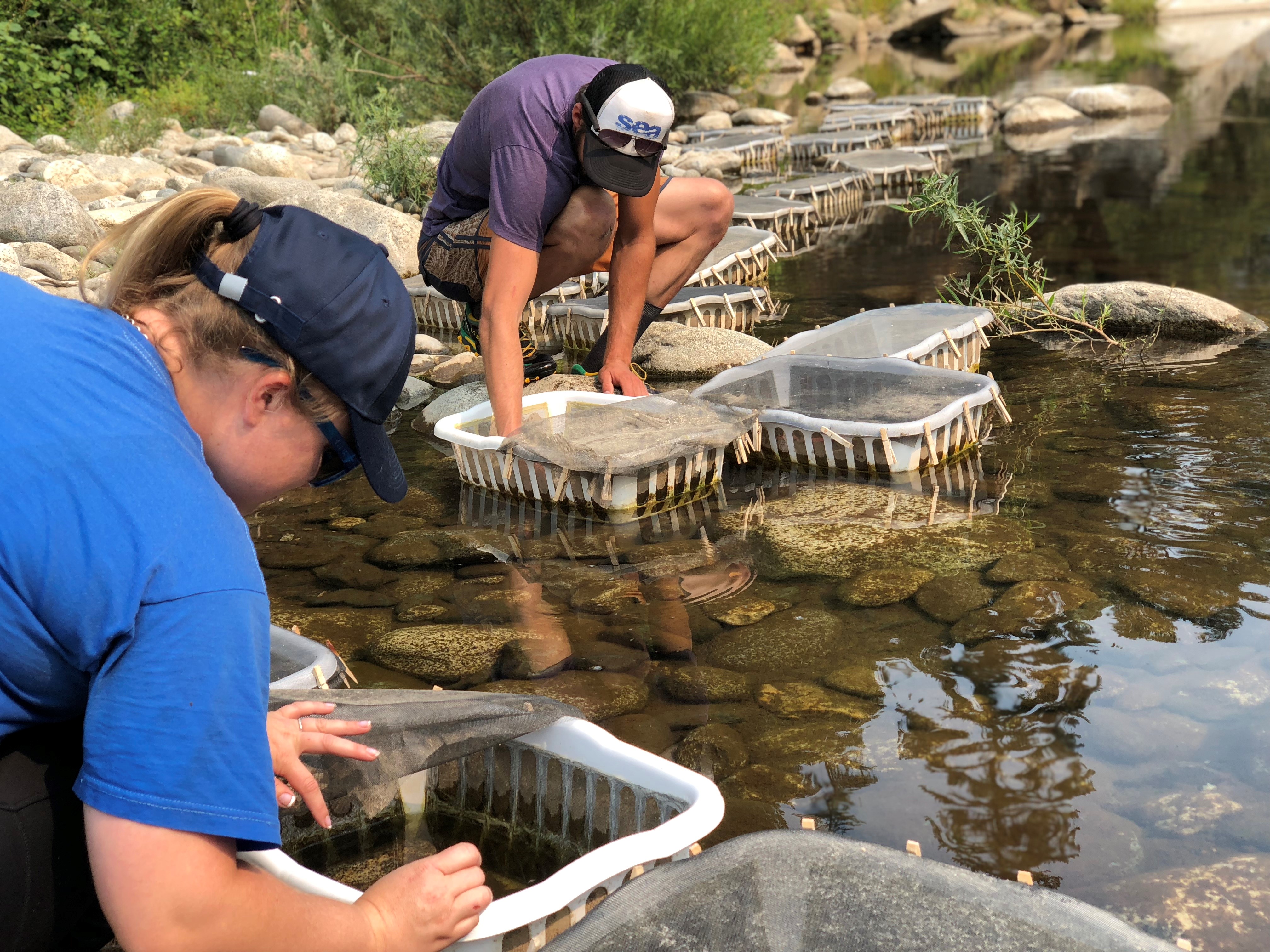