Happy belated Earth Day. Often times I’m asked, “What is the zoo doing to celebrate Earth Day?” I usually respond that we celebrate it every day as the Sacramento Zoological Society achieves its mission to inspire appreciation, understanding and respect for all living things through stimulating education, wholesome recreation and innovative species management by working within our community and reaching out beyond its physical boundaries.

A huge (both figuratively and physically) part of our mission is caring for the Sacramento Zoo’s largest residents, our giraffes. The animal which adorns the zoo’s logo has had some serious conservation challenges. Scientists estimate that over the past three decades the population of wild giraffes has decreased by 36-40%. Less than 100,000 of these beautiful animals remain in the wild. Compounding the complexity of this population drop is that giraffes face different threats throughout their range. The good news is that with conservation measures and careful management, giraffe populations in certain parts of Africa are increasing. Conversely, in other parts of their range they have seen significant drops in their numbers, and in some former giraffe ranges, they have gone extinct.

The Sacramento Zoo feels it is important for our animals to serve as ambassadors to the needs of giraffes in Africa. We have made the activity of visiting the zoo an essential part of conserving this species in the wild by donating proceeds from our Quarters for Conservation program to the Wild Nature Institute. Based in Tanzania, Wild Nature Institute studies and monitors the population of 3,500 giraffes within the Tarangire and Serengeti ecosystems. In the fall of 2019, Matt McKim, our Director of Animal Care, led several trustees and supporters on an Africa safari to witness firsthand the work that our partners conduct within these ecosystems to save these magnificent mammals.

Observing giraffes at the Sacramento Zoo is a great way for our guests to make the connection between our critical in-situ conservation work and the majestic giraffe. There are nine subspecies of giraffes and physically, their markings can look quite different. The Sacramento Zoo focuses on breeding the Masai giraffe. Graphics around the giraffe habitat detail our work with this species and the challenges that affect them in the wild. Even within zoos, the populations of these vulnerable animals are carefully managed. The Association of Zoos and Aquariums (AZA) have a Species Survival Program (SSP) for giraffes. This program looks at the genetics of the 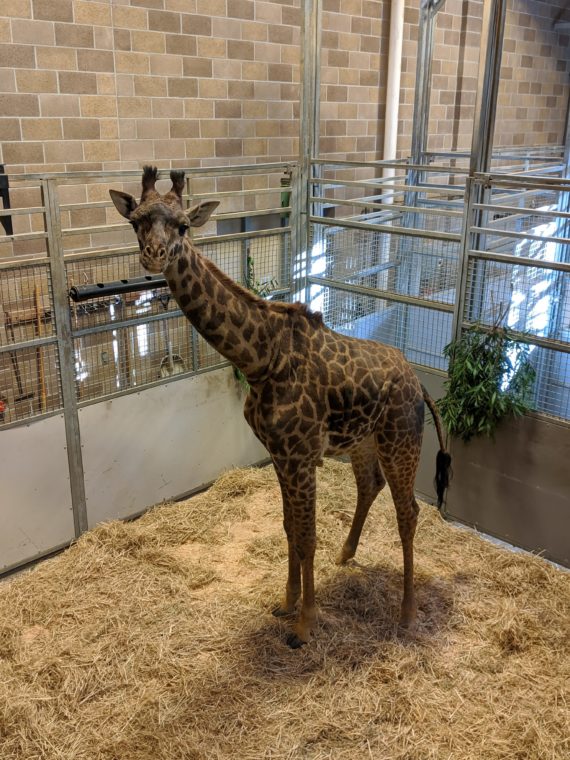 North American population of giraffes and shares husbandry and data with scientists in the field. The SSP also makes recommendations for transfers of animals between zoos and breeding recommendations. A few months ago, the SSP recommended a transfer of a female giraffe to be sent to the Sacramento Zoo as a potential mate for our male, Chifu.

This week our giraffe herd grew by ONE with the addition of a new female giraffe, Amirah. Amirah was born on March 14, 2018 at the Santa Barbara Zoo. She arrived at the Sacramento Zoo on Tuesday evening and is slowly adjusting to her new surroundings. The plan to bring Amirah to Sacramento has been in the works for months. As mentioned, the long term goal would be to have Amirah and Chifu breed and produce a calf to support the SSP population. We also house another breeding female Masai giraffe named Shani. It is hoped that Shani will give birth to another calf within the next year. Finally, we care for a post-reproductive reticulated giraffe named Skye. You can observe the pattern differences between the two-subspecies at the zoo. The Masai giraffes have leaf-shaped spots and the reticulated have large blocky-shaped spots.

We are one of the only zoos within the United States to house reticulated giraffe, Masai giraffe and their closest relative, the okapi. Truly, Sacramento Zoo is committed to the care of giraffes and okapi, both in the wild and here in Sacramento. This excellent care is made possible through your dedication as members and supporters.

I will continue to update you within the next few weeks about Amirah’s transition to Sacramento. We look forward to welcoming you back to the zoo so you can view this tall blonde with beautiful eyelashes. In the meantime, I want to continue to thank you for your support and hope that you and your loved ones are healthy and safe.