The following was sent via email newsletter on April 17, 2020:

I hope this note finds you and your loved ones safe and healthy. The zoo continues to operate with a core group of dedicated employees working to care for the animals and facilities. Many of you have helped us with a contribution to our Emergency Relief Fund and on behalf of the Sacramento Zoo, I want to thank you for your support.

When the zoo reopens there will be several new animals in residence for you to observe. Just before the zoo shutdown, we welcomed two female ostriches to Sacramento. They were brought in to create a mixed-species exhibit with our trio of female Grevy’s zebra.

Ostriches are flightless birds. They do have wings, but rather than using them for flying they are used for balance when these large birds run. The ostrich’s speed, capable kicks and large size enable them to successfully fend off most predators. As the world’s largest bird species, the females can be five-and-a-half to six feet tall and weigh around 200 pounds, while male ostriches can be seven to nine feet tall and are slightly heavier, averaging around 250 pounds. In planning this mixed-species exhibit, our staff worked with other zoos to locate female ostriches. Given the zoo’s limited footprint, we do not possess the facilities to house male ostriches. Male ostriches are potentially dangerous animals. Their large size, strength and quickness creates a combination that makes them a bit more difficult to manage, especially within a mixed-species habitat. The common ostrich (the species we house) is not an Endangered species. They are actually farmed in certain parts of the world and have a stable population in the wild. The zoo does support the Saharan Conservation Fund which studies the North African ostrich, an Endangered subspecies of ostrich. 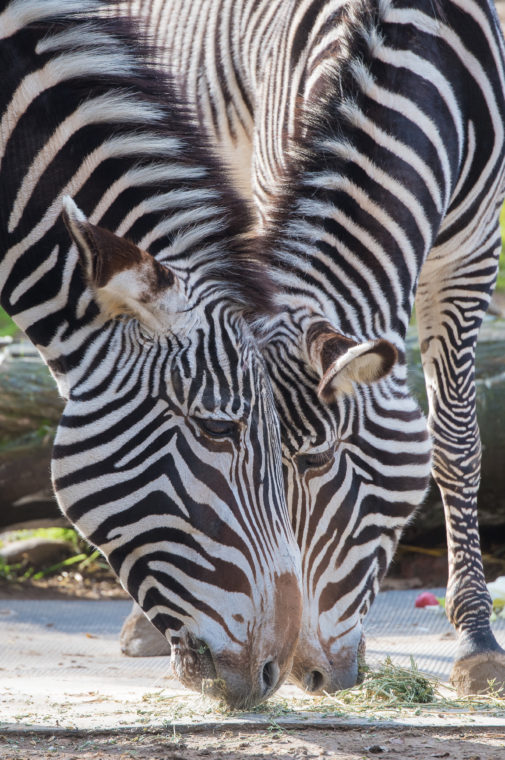 The ostriches’ exhibit mate, the Grevy’s zebra is an Endangered species and the largest species of zebra. There are fewer than 3,000 of these beautiful equids (the name for horses and zebras) in the wild of Kenya and Ethiopia. The Sacramento Zoo supports the Grevy’s Zebra Trust, a conservation organization for biologists to assess the wild population of this species. The Grevy’s zebra derives its name from Francois Paul Jules Grevy, president of France from 1879-1887. Sacramento Zoo houses three post-reproductive female zebras. Male zebras (stallions) can be aggressive, especially during the breeding season. Once again, due to our limited footprint, the zoo does not possess the facilities to house a breeding herd of these rare animals, so we support the Association of Zoos and Aquariums’ Grevy’s zebra population by housing the aged females. By housing these older animals, it enables other zoos with breeding herds to produce more offspring for this Endangered species.

Introducing the ostriches to the zebras was a process that took several weeks. There is a degree of risk with any animal introduction. First, the ostriches were given access to adjacent holding areas, so the ostriches and zebras could see each other through a barrier. Second, the ostriches were given access to the habitat while the zebras were held off exhibit. This allowed the ostriches to become familiar with the paddock, the moat, topography, etc. Finally the animals were introduced to each other with zookeepers observing the interactions. The zebras would occasionally chase the ostriches; however, no major aggression was noted. After several days, our animal care team felt comfortable leaving the animals together at all times.  The end result is a fantastic mixed-species habitat which features two species that would naturally co-exist in the wild. 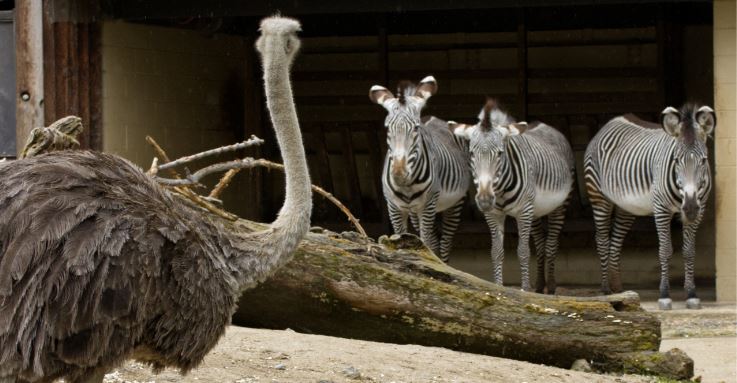 The habitat will exclusively remain a “ladies’ club” for the hens and mares, the respective terms for female ostriches and zebras. We look forward to sharing this new combination with our guests when we reopen the zoo. You can imagine you are in Samburu National Park in Kenya as we present a window to the wild within Sacramento!

Until then be safe, stay healthy and thank you for your continued support of the Sacramento Zoo!

Jason Jacobs
Executive Director
Sacramento Zoo
If you wish to assist the animals during these unprecedented times, please consider a donation to the zoo’s Emergency Relief Fund.