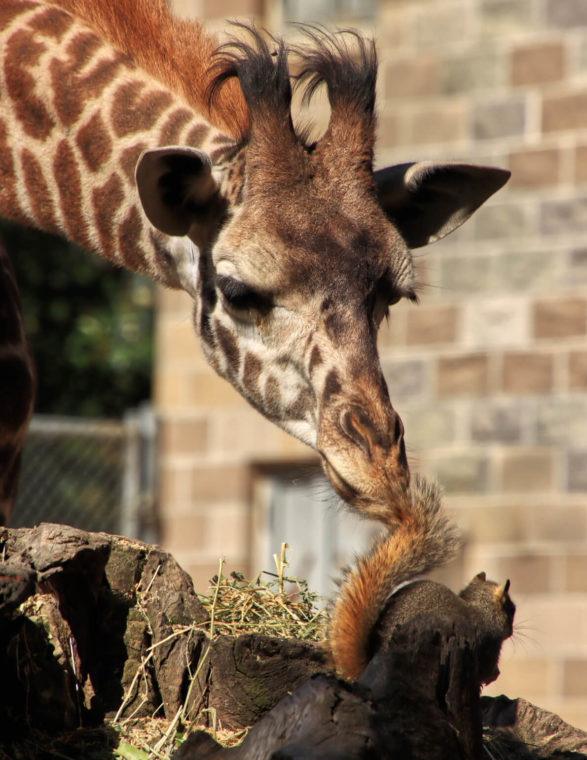 When you visit the Sacramento Zoo, you expect an exciting day of lions, okapis, and flamingoes. But there is another resident at the zoo that often goes unnoticed. The humble squirrel.

Squirrels often get a bad rap. They raid bird feeders. They can chew through just about anything. They dart out in front of cars. They nest in attics. But, while sometimes inconvenient for humans, squirrels have a lot to offer. And they’re a lot of fun to watch if you stop and take the time.

This prolific rodent that can be found on every continent except Australia and Antarctica. Squirrels thrive in almost every habitat with some vegetation, from Sacramento’s tidal-influenced freshwater marsh to tropical rainforests and semiarid deserts.

There are over 200 species of squirrels worldwide. Two of the most common species found in Sacramento are the Eastern fox squirrel and gray squirrel. Gray squirrels and fox squirrels can interbreed, potentially creating rare black squirrels.

Fun fact: squirrels are one of the reasons straws are prohibited at the Sacramento Zoo. Even if you properly dispose of your straw in the trash can, squirrels think straws are excellent toys and tools and will pull the straws from trash cans, often depositing them in animal enclosures where they can become a hazard.

Tree squirrels help maintain plant biodiversity in forests. Squirrels bury seeds for later consumption, but then forget where they buried their cache. Over time, the seeds will sprout, expanding the forests and adding to tree diversity.

And did you know that hibernating ground squirrels, such as the California ground squirrel, may hold the key to treating strokes? Hibernating squirrels experience a loss of blood flow to their brains, like stroke patients. However, squirrels wake up without brain trauma due to a cellular process that protects brain cells. Scientists have isolated the enzyme that keeps oxygen-deprived brain cells from dying and research is now being conducted to hopefully create a treatment to improve stroke recovery.

The next time you visit the Sacramento Zoo, take a moment to appreciate that squirrel jumping from fence post to fence post, or stop to observe his cousin who dares to enter the cheetah exhibit in search of a nut. Think about their wonderful contributions to nature and biodiversity. And as we celebrate National Squirrel Appreciation Day on January 21, take special note of these fun, interesting and mysterious fluffy-tailed creatures.

Want to know about the OTHER squirrel at the zoo? Read more about squirrel monkeys here!

Find out more about the heritage oak trees!