When people think of dinosaurs, they generally imagine the dinosaurs depicted in the popular Jurassic Park series. However, the real-world picture of dinosaurs painted by paleontological research suggests a different view of Mesozoic era.

Lucky for you, the dinosaurs at the Sacramento Zoo’s Dinosaur Safari exhibit are all life-sized and as paleontologically accurate as possible! Ready your cameras and explore the difference between Jurassic Park and real world dinos.

Dromaeosaurids: A Family of Raptors 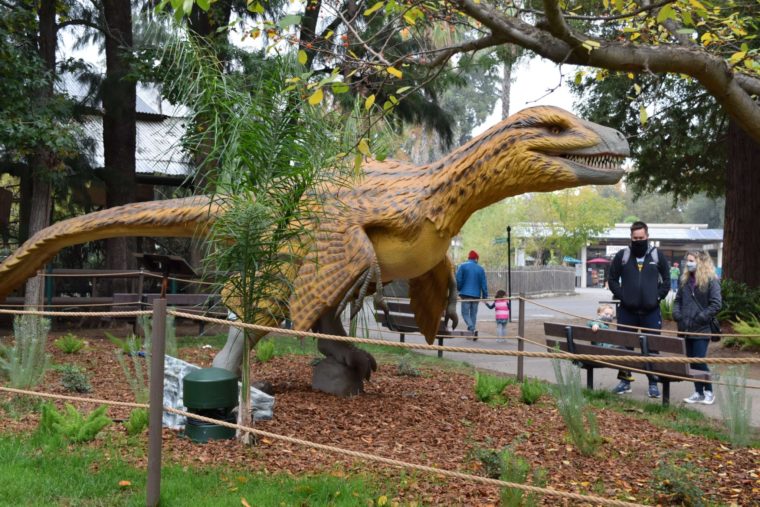 Size is a big deal in action-adventure movies. Godzilla would not be nearly as imposing if he were the size of a horse. Velociraptors in the Jurassic Park world stand at six feet high, looking down at protagonists Alan Grant and Owen Grady. In the real world, they were just over a foot tall, making them one of the smallest in the dromaeosaurid family (a family of feathered theropods that included raptors).

While Velociraptors weren’t actually six feet tall, the Sacramento Zoo is home to a dinosaur that was, the Utahraptor. Utahraptor is the oldest known and largest of the dromaeosaurids. Like Velociraptor, Utahraptor had a large, curved claw on its second toe, primed to deliver a lethal blow.

When you visit Utahraptor and Deinonychus at the Sac Zoo, you’re bound to notice another difference from the movies:  feathers. Dromaeosaurids were feathered, including Velociraptor, Utahraptor, and Deinonychus. Paleontologists have known about the existence of feathered dinosaurs since the discovery of Archaeopteryx in the early 1860s. In Jurassic Park’s defense, the quill knobs on Velociraptor’s forearms weren’t discovered until 2007, 14 years after the release of the first movie.

Further paleontological research suggests that Velociraptor wasn’t the only Jurassic Park dinosaur that was supposed to be feathered; Tyrannosaurus rex also sported a fine coat of feathers.

Tyrannosaurus rex hatchlings were likely covered in fine, downy feathers. Paleontologists debate whether T. rex lost their feathers in adulthood. Some hold that as T. rex matured, they would lose their feathers, resulting in an image similar to the Tyrannosaurus rex that greets guests here at the Sac Zoo. Others believe that as T. rex grew, they would retain feathers on their head, neck, and tail, likely for display.

Tyrannosaurus rex wouldn’t have been nearly as intimidating in the Jurassic Park movies without her iconic bellow, inspired by the large, apex carnivores of today. However, in reality, T. rex’s cry was more of a low-frequency rumble. A team led by paleontologist Julia Clarke and naturalist Chris Packham studied a 3-D scan of a T. rex skull to determine that its hearing was tuned to one low-frequency call – that of another T. rex. The team took the sound of a Chinese alligator and lowered the frequency to match that found in the scan. It resulted in a deep, threatening rumble that could be felt as well as heard.

These low-frequency sounds allowed T. rex to communicate over long distances, not unlike whales and elephants today.

The Tyrannosaurus rex is very quick on her toes in the Jurassic Park movies. John Hammond, the owner of Jurassic Park, says in the film that they “clocked the T. rex at 60 mph.” Later, the giant dinosaur nearly runs down a jeep.

Today, paleontologists believe that T. rex would have reached speeds of about 10 mph – the speed of a jogging human. But most of T. rex’s prey was comprised of slow-moving herbivores or carrion (and sometimes even other Tyrannosauruses!).

Fossil records suggest that T. rex was a pack hunter. Groups of Tyrannosaurus rexes ranging from ages two to 26 have been discovered together. T. rex trackways depicting multiple T. rex individuals travelling together have also been unearthed, supporting the hypothesis of T. rex herds.

When you visit the Tyrannosaurus rex animatronics at the Sac Zoo, you can imagine the two dinosaurs cooperatively hunting together, working to pin you between the flamingos and membership office.

Spinosaurus made its Jurassic Park debut in the third movie as a rival to Tyrannosaurus rex. It’s hard to forget the ferocious battle at the beginning of the movie, which, for the first time, toppled the mighty T. rex. While it is true that Spinosaurus stood taller than T. rex (23 ft vs 20 ft), T. rex had far more mass and a greater bite force. Spinosaurus was simply not designed for epic, terrestrial battles. 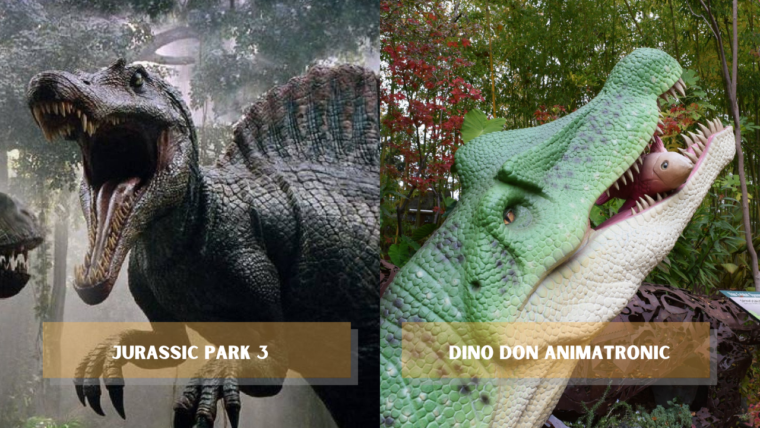 Spinosaurus is a true aquatic dinosaur. Its iconic sail is complimented by a giant fin running along its tail. This tail fin would have provided powerful underwater locomotion, allowing it to effectively hunt fish and other marine animals. Paleontologists believe that Spinosaurus may have had a similar lifestyle to alligators and crocodiles, able to remain in the water for long periods of time as the dinosaur hunted. Geological studies in Egypt, where Spinosaurus fossils were discovered, found that Spinosaurus lived in ancient mangrove forests. Its slender build, elongated snout, and highly adapted fins made Spinosaurus ideally suited as an aquatic hunter.

Why are the dinosaurs in Jurassic Park so different from real world dinos? 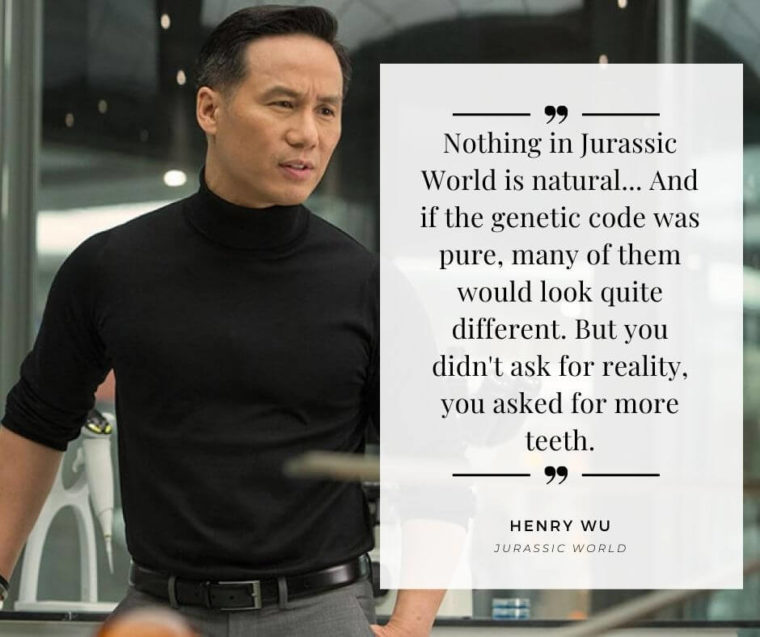 Jurassic Park is not a documentary. It is an action-adventure monster story. The story required monsters, not real-life animals, something acknowledged by the franchise. Dr. Henry Wu, the geneticist at Jurassic Park that created the dinosaurs, said, “Nothing in Jurassic World is natural… And if the genetic code was pure, many of them would look quite different. But you didn’t ask for reality, you asked for more teeth.”

There’s nothing wrong with a monster movie filled to the brim with teeth and roars, but it’s important to differentiate fact from fiction. Enjoy the dinosaurs of Jurassic Park for what they are: fun, iconic movie monsters.

As you ramp up for the release of Jurassic World: Dominion later this year, book your tickets for the Sacramento Zoo. Take a walk around our Dinosaur Safari, populated by life-sized, paleontologically accurate dinosaur animatronics.

“Time, the ever-flowing river. Come with us now to a time before man when the river flowed through a new-born world and giants walked the earth.”

Learn more about the animatronic dinosaurs at the Sac Zoo on our Dinosaur Safari page.

Help the Sacramento Zoo in our conservation efforts to save wildlife locally and around the world. Consider making a donation to our conservation fund or becoming a recurring monthly donor.