The Caribbean flamingos are a favorite animal at the Sacramento Zoo. It is a common sight to see groups of guests pushed up against the fence, chuckling at the birds’ antics. Artist Charley Harper summed it up, “A flock of flirting flamingos is pure, passionate, pink pandemonium—a frenetic flamingle-mangle-a discordant discotheque of delirious dancing, flamboyant feathers, and flamingo lingo.”

Flamingos are extremely vocal, living in large colonies ranging from a few dozen birds to hundreds of thousands of individuals during breeding season. Flamingos use a wide range of vocalizations, from honks to barks. All these vocalizations are important in maintaining flocks, displays, and in parent-chick recognition.

Flamingos gain their vibrant, pink hue from their diet. The carotenoid pigments in the algae and crustaceans, such as shrimp, produce shades of pink and red in flamingos when broken down during digestion. Flamingo chicks are born with grey feathers, not adopting the bright colors until they are about 2 years old.

Flamingos are filter feeders! When feeding, they put their large, curved beak upside down in the water. Then, they use their tongue to pump water in and out of their beak. Serrations on their beaks strain food particles from the water.

The Caribbean flamingo is considered an animal of Least Concern by the International Union for Conservation of Nature, but they do receive some protection being listed on appendix II of the Convention on International Trade in Endangered Species. Loss of habitat, most specifically draining of lagoons and marshes, has had the most negative effect on flamingo populations throughout the world.

Although he overall populations of the Caribbean flamingo are increasing, there are only four main breeding colonies of the species in the wild. One hundred years ago, there were close to fifty. 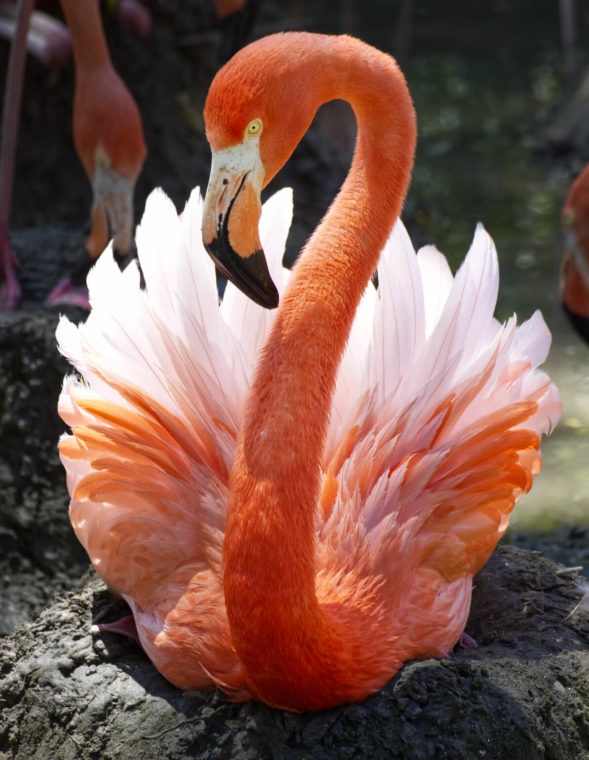 As with all our animals, providing them excellent care is our top priority. The flamingos are no exception. After weeks of preparation, all 47 of the zoo’s Caribbean flamingos received their health checkup today during the annual Flamingo Round-Up. This event allows our animal team to provide each, individual flamingo with care and attention. After receiving a clean bill of health, each flamingo is carefully released back into their enclosure.

Come see the Sac Zoo flamingo flamboyance for yourself! Plan ahead and save on your Sac Zoo admission.