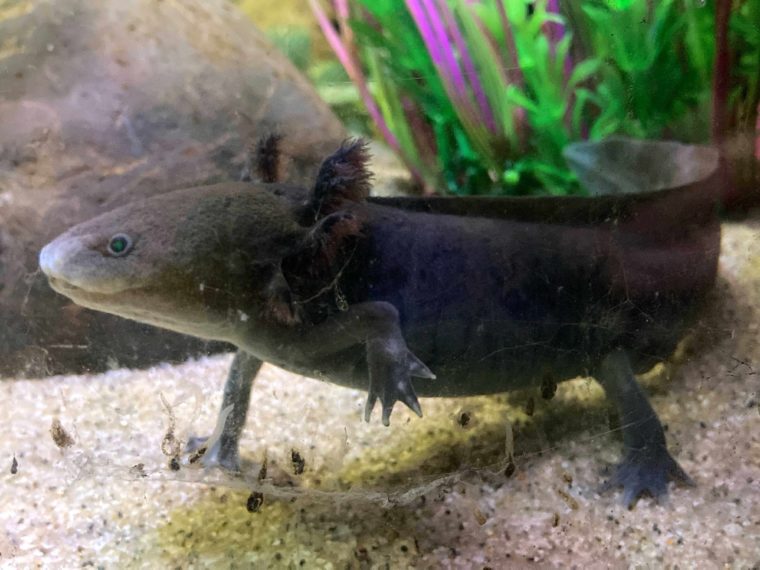 According to legend, the axolotl is the Aztec god of fire and lightning, Xolotl. This god was often depicted as a dog-like creature. Fearing banishment or death from the other gods, Xolotl transformed himself into an axolotl and fled into Lake Xochimilco. This story is how the axolotl got its name, which means “water dog” (atl for water and xolotl for dog).

The axolotl (pronounced ACK-suh-LAH-tuhl) may not be a transformed god, but these unique salamanders are quite interesting in their own right. Unlike most salamanders, axolotls are neotenic, meaning they don’t fully outgrow their larval stage. They maintain their feathery gills, webbed feet, and dorsal fin, making axolotls adept at living in the water. While they maintain gills, axolotls also develop functional lungs, allowing them to survive outside the water for short periods of time, provided they stay moist and don’t dry out.

One of the most interesting qualities of axolotls are their regenerative abilities. Instead of forming scar tissue when healing an injury, the tissue at the site of the wound converts into a stem cell-like state. This ability allows them to not only heal skin tissue, but even grow back limbs, organs, parts of the eye, and even less-vital portions of the brain.

Axolotls are critically endangered. They are only endemic to Lake Xochimilco in the Valley of Mexico and occupy less than 10 square kilometers. Axolotls also used to live in Lake Chalco, but the lake was drained in the 1970’s to mitigate flooding. Continued development in and around Lake Xochimilco, combined with draining Lake Chalco, severely fragmented the axolotls’ habitat. Drainage and runoff from Mexico City have contaminated much of Lake Xochimilco. The axolotl’s amphibious skin is permeable, making them highly vulnerable to ammonia, heavy metals, and other toxins present in sewer drainage, pesticides, and heavy cleaning agents.

Powerful storms sweep through Lake Xochimilco, sweeping waste and runoff into the lake. Major infrastructure improvements have been proposed to address this runoff. Mexico City’s current sewer system is outdated and unable to withstand storms and an every-increasing population. However, such an update would require a major investment for the local government.

Axolotls were once a top predator in their environment, key in maintaining a healthy ecosystem. In the 1970’s, African tilapia and Chinese carp were introduced to Lake Xochimilco to generate additional fisheries. Without natural predators, these fish overtook the ecosystem. The biggest concern for axolotls is that tilapia and carp eat axolotl eggs and compete for the same food.

In a strange twist of fate, while axolotls are critically endangered in the wild, there are tens of thousands of axolotls found in home aquariums and research laboratories around the world. As Richard Griffiths, an ecologist at the University of Kent, put it, “The axolotl is a complete conservation paradox…because it’s probably the most widely distributed amphibian around the world in pet shops and labs, and yet it’s almost extinct in the wild.”

Conservation efforts are underway to protect and “regenerate” the wild axolotl population. In 1993, the Mexican government established the Xochimilco Ecological Park and Plant Market in a bid to protect axolotl habitat. The protections allotted to the park have allowed for many of the wetlands to rebuild themselves. Unfortunately, the park suffers from pollution from wastewater treatment plants and urbanization.

Luis Zambrano is an axolotl expert from the National Autonomous University of Mexico and one of the leaders in axolotl conservation. He and his team have established temporary ponds for captive axolotls. Initially, Zambrano released 11 pairs of axolotls into three ponds. Seven of the eleven pairs hatched eggs. The resulting juveniles are healthy. These axolotls are considered an insurance policy. They will not be released into Lake Xochimilco until the ecosystem is restored or the current population disappears.

The local community is engaged in making a difference. Local boatmen, called romeros, lead guided tours of the lake, emphasizing axolotls and their habitat. Local fishermen work with scientists to conduct population censuses. It takes a lot of skill to search for and successfully catch axolotls without harming them. Luckily, this is a skill that has been passed down through generations of local fishermen.

Traditionally, farmers used chinampas, floating gardens, to grow food. Chinampas are an ancient farming method that was used by ancient Aztecs 2,000 years ago. These gardens are constructed with local vegetation and mud from the lake. This sustainable farming method mitigates the need for toxic pesticides, providing a clean, filtered sanctuary for axolotls.

Axolotl conservation is a work in progress. The axolotl was predicted to be extinct in the wild by 2020, but fortunately, at least for now, that is not the case.  As conservation efforts expand, interest and support for axolotls has blossomed. The next few years will be crucial for communication, engagement, and habitat rehabilitation. There is still hope for a bright future for wild axolotls.

How can you help axolotls and other aquatic life?