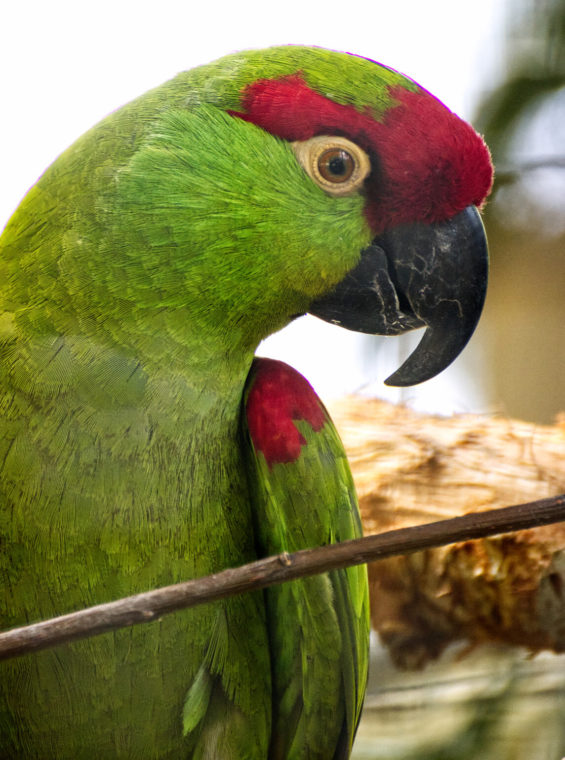 One cannot enter the Sacramento Zoo without being greeted by our flock of thick-billed parrots. From their aviary across from the American alligators, these rambunctious, vociferous birds are a conservation highlight.

Thick-billed parrots are classified as Endangered by the International Union for the Conservation of Nature (IUCN). At one time, the thick-billed parrots’ range extended northwards to southern Arizona and New Mexico and south to Venezuela. Today, the birds are only found in higher elevations of the Sierra Madre Occidental Mountains in northern Mexico in about a 6,000 acre stretch of forest. Researchers estimate that there may be less than 2,000 individual parrots left in the wild.

The San Diego Zoo Safari Park veterinary team works with their Mexican partners to monitor the health of wild thick-billed parrots. A major threat to the populations are ectoparasite infestations of chicks and nests. Ectoparasites are organisms that live on the skin of their host, where they get their sustenance. Researchers have identified four types of parasites, but most of the parasites are hematophagous (meaning they drink blood, like ticks), which can be very detrimental to young chicks. Veterinarians developed treatments for nests and chicks that have improved population survival.

Thick-billed parrots migrate seasonally, but the birds’ winter habitats and migration patterns have been largely unknown. This lack of information makes conservation and habitat rehabilitation efforts more difficult. The San Diego Zoo’s conservation partnership developed miniature tracking devices to gain more information. The solar-powered trackers transmit data using a network of satellites, allowing the researchers to monitor the birds without disturbing them. The small transmitters attach to the parrots using a backpack harness. The harness, thoroughly tested by the San Diego Zoo, does not interfere with any of the thick-billed parrots’ behaviors.

In 2019, the transmitters were first deployed to ten wild thick-billed parrots during health exams conducted by OVIS researchers. Those transmitters provided migratory information to the researchers as the birds began to travel south for the winter. The study found that the parrots travel as far as 360 miles (580 km) from their capture locations in less than two weeks. The transmitters determined how the birds flock together and revealed important stopover locations during migration.

As Miguel Cruz, OVIS’s conservation director, explained, “This plan guides Mexico’s work towards recovering thick-billed parrots in the country. The information generated by the transmitters will allow OVIS’s team, together with landowners and forest administrators, to manage habitat protection strategies — including protecting natural areas, ecological conservation, and the implementation of better practices for forest usability and management.”

The AZA manages a Thick-Billed Parrot Species Survival Plan (SSP). The SSP program is a cooperative effort between AZA-accredited institutions to manage an ex situ (off-site conservation) species population. Both the San Diego Zoo and the Sacramento Zoos participate in the Thick-Billed Parrot SSP. There are approximately 73 thick-billed parrots living in 10 AZA-accredited zoos. The flock at the Sacramento Zoo is currently the largest with 21 birds with the most successful breeding program in the United States.

Melissa McCartney, the Sacrament Zoo’s Senior Manager of Animal Care, was named the Program Leader for the Thick-Billed Parrot SSP in 2021. In this role, Melissa, oversees the population of thick-billed parrots at AZA-accredited zoos and helps maintain a sustainable population.

One of the challenges in the SSP is managing genetic diversity to avoid inbreeding and maximize the genetic health of the population. First, the zoos manually track the genealogy of their birds. In addition to record keeping, molecular data from 66 birds in zoo-care was analyzed, further guiding breeding recommendations.

Just this year, a genetically valuable thick-billed parrot chick named Miracle was hatched here at the Sacramento Zoo. Chicks like this are the result of zoo collaboration and help maintain a stable population in the present and create a bright future for thick-billed parrots.

Want to learn more about Miracle and her parents, Delilah and TK? Read more here!