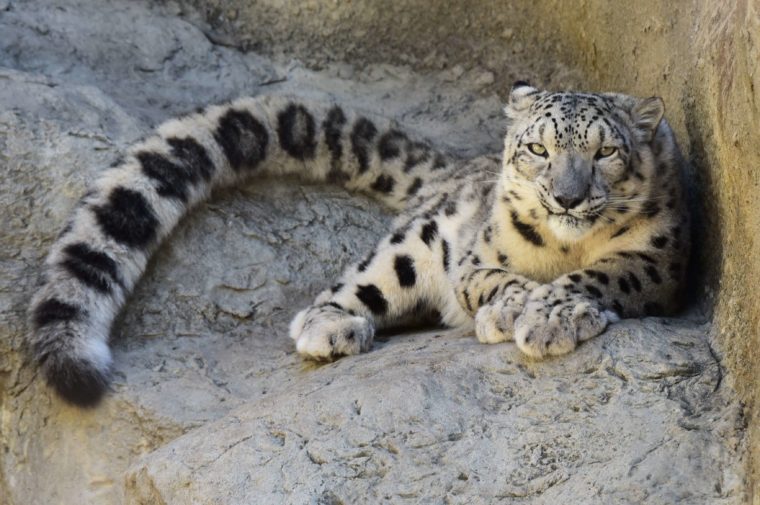 There are few animals that capture the imagination like snow leopards. As Tashi R. Ghale wrote in Searching for the Snow Leopard, Guardian of the High Mountains, “Beyond the ecological importance of a top predator like the snow leopard, there is something inherently mystical that draws us to these powerful big cats. Their ability to survive in one of the world’s harshest climates, combined with their beauty and ethereal quality, has been the impetus for humans to not only respect and admire them but also revere them.”

Snow leopards live in the mountains of central Asia, across 1.2 million square miles and 12 different countries. Due to the extreme conditions, more than 70% of snow leopard habitat is unexplored. Snow leopards can be found from 3,000 feet to more than 18,000 feet when crossing mountain passes. The snowy, rocky habitat is perfect for snow leopards to thrive with their thick, grey-white coats and large paws. Depending on where they live, these cats can be either nocturnal or crepuscular (active at dawn and dusk). The mountain terrain is home to snow leopard prey, such as Argali wild sheep, ibex, marmots, pikas, and hares. Impressively, snow leopards can kill prey up to three times their own weight.

Despite their important role in their ecosystem and local culture, snow leopards are endangered. These threats range from habitat loss, prey depletion, by-catch snaring and poisoning, to poaching and retribution killings for livestock predation. Today, there are an estimated 4,000 to 6,000 snow leopards left in the wild.

When scientists monitor a population, they use a variety of methods, such as trail cameras, radio cameras, and fecal sampling, to track the behaviors and size of a particular population as well as evaluate the health of that population and determine how species and ecosystems change over time.

Monitoring provides a vital insight into snow leopard populations. It allows scientists to estimate population numbers, behavior, migration patterns, and more. Using five different methods, the Snow Leopard Conservancy uses the data they collect to build a comprehensive picture of the wild snow leopard population. Conservation is more successful if scientists have reliable information on habitat, where snow leopards are at most risk, and where the animals overlap with humans. This information helps develop cost-effective and efficient conservation plans.

Livestock safety depends on the ability of corrals to protect them at night when snow leopards are liable to kill them. Everything from the type of structure, location to additional guarding techniques make a difference. Predator-proof corrals are one solution. These corrals have sturdy, high walls and are covered with a strong roof, typically chain link fencing. This prevents the snow leopards from jumping into the enclosure. Predator-proof corrals are also equipped with Foxlights®. These lights emit random light patterns that simulate human activity to frighten predators.

Snow Leopard Day is an annual festival celebrated in Mongolia, Nepal, and Pakistan. The celebrations and educational workshops increase awareness of the role snow leopards play in their ecosystem. These celebrations reinforce the cultural and spiritual significance of snow leopards for the native people.

Snow leopards play an important role both in their ecosystem and to indigenous culture. Snow leopard populations are in danger, but it isn’t too late to make a difference. Organizations like the Snow Leopard Conservancy partner with local communities to expand environmental awareness and create innovative conservation solutions that are beneficial to everyone.