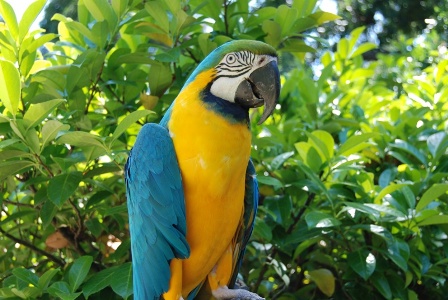 Julio the Blue and Gold Macaw

Julio the Blue & Gold Macaw been winning the hearts of zoo visitors ever since he first arrived in 1992. As an animal ambassador, Julio works with many staff members in the Interpretive Center to demonstrate his adaptations and characteristics that enable his species to survive in the wild. Julio is then able to participate in educating the public about animals and animal conservation.

One of Julio’s more clever behaviors is that while IC staff are working in their office, Julio will walk across the floor to another birds’ enclosure to sample their food. Since his nails make noise as they click across the floor, Julio has learned to walk on his heels to lessen the sound and his chances of being caught! A favorite enrichment that zookeepers give Julio is a cardboard box with newspaper. He loves to manipulate things with his beak and will work on tearing the box apart until nothing but tiny shreds of cardboard are left.

Julio is quite the “ham” and can often be found showing off in front of the cameras. He makes regular appearances on local tv programs as an animal ambassador, participates in ZooMobile programs, stars in Wildlife Stageshows, and basks in the praises of visitors as a greeter at the zoo’s entrance.