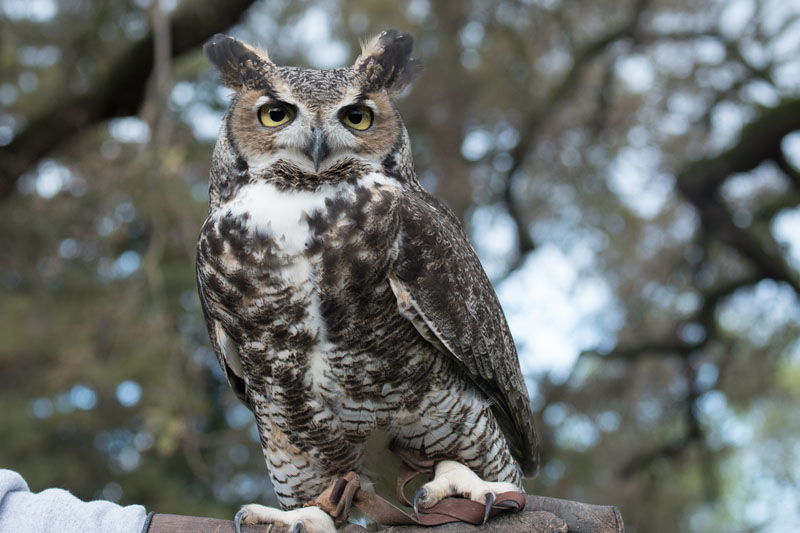 It is estimated that Charlie was born in 2014. He arrived at the Sacramento Zoo in early 2015. Charlie was a wild owl who found himself at the Abilene Zoo rehabilitation program. During his examination he was found to be in full health and able to go back into the wild. On release day, when the crate doors opened, all of the other Great Horned Owls flew off, but Charlie stayed right where he was. At that time it was recognized that he preferred people and was well suited for a zoo. From there Charlie found a home at the Sacramento Zoo.

Charlie is a full-grown owl and weighs just over two pounds. He enjoys admiring and hooting at the handsome bird he sees in the mirror in his enclosure. He also spends a great deal of time keeping tabs on what his neighboring Laughing Kookaburra is doing, and watching the world around him. Great Horned Owls like Charlie vocalize the classic hooting noise attributed to owls. He can be seen participating in a variety of activities including Wildlife Stage Shows, Overnight Safaris, going out to schools on ZooMobile programs and making media appearances. His training also includes walkabouts around the Zoo to desensitize him to a variety of sights and sounds.

Great Horned Owls range from the Arctic tree line in Canada and Alaska, south through the United States and Central America, and into South America. They are the second largest and one of the most common owls in North American and exert 28 pounds of pressure with their foot grip.