Conservation at the Zoo

Conservation can mean many things, but to us it means striving every day to conserve valuable resources like water and energy, reduce our waste and increase our recycling, and help to educate staff and visitors about their important role is saving our environment, animal species and the habitats in which they live.

Donate to the Conservation Fund

The Sacramento Zoo is home to some of the city’s oldest residents, three approximately 300-year-old valley oak trees, also known as heritage oak trees, which are environmentally protected in Sacramento. The valley oak is the largest oak tree in California and the drought-resistant tree can grow to over 100 feet tall and live for almost 500 years. In order to protect the trees, the Sacramento Zoo has placed a fence around them. The fence impacts the space available on the Reptile House lawn and some of the activities and events that have previously been held under the drip line of the trees.

One of the biggest concerns is the effect of foot and vehicle traffic on the roots of the trees. Compacting the earth around the tree reduces the gas exchange that is necessary for the roots to live. Also, watering under the trees can cause root rot and would aid in the demise of the majestic tree. Moving forward, the zoo will work diligently to maintain the health of the protected oaks while also efficiently utilizing space for events and zoo programming.

The valley oak trees are a part of the Sacramento Zoo’s diverse collection of botanical specimens that contribute significantly to the landscape and habitats enjoyed by visitors and animals alike. As stewards of the earth, it is important that the zoo protect these graceful giants that carry great historical importance in the region and are home to local wildlife. Collectively, valley oak riparian forests support 67 nesting bird species including the Swainson’s hawk which is threatened with endangerment in California. Valley oak riparian forests also provide homes or cover for several other species endangered statewide or federally including the greater sandhill crane, yellow-billed cuckoo, and elderberry longhorn beetle. Valley oak seedlings, acorns or roots are nutritional staples for many species including the pocket gopher, California ground squirrel, scrub jay, yellow-billed magpie, acorn woodpecker, black-tailed deer, feral pig, and some cattle. 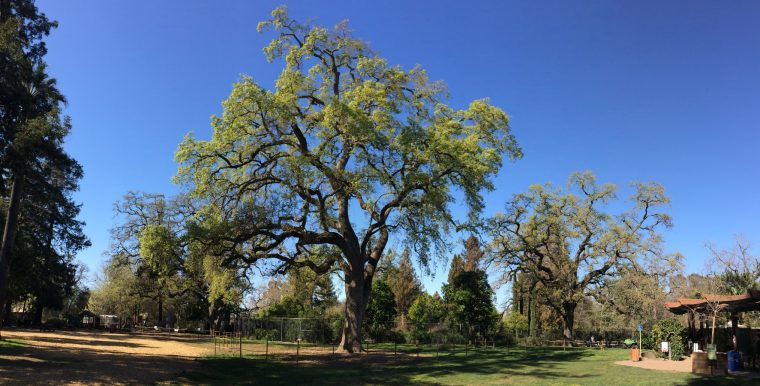 The Green Team formed in 2003 and aims to encourage greener behavior from all staff, docents and volunteers. There is an overall effort to reduce waste, conserve energy and create positive change here and with in our community. Here is a small sample of the practices we are committed to following.

One of our most successful projects is converting our zoo members to “green” members who only receive electronic copies of renewal notices, newsletters and other mailing. In 2006 we started with 400 green members and now have over 11,000.

Help us save money on postage and printing cost as well as saving paper! To become a green member, email the Member & Visitor Services Office or call 916-808-5888.

In July 2017, the Sacramento Zoo underwent a complete rebrand. Rebranding an organization is a huge feat and once you have your fancy new logo, you don’t want the old logo on anything! But of course, that means replacing uniforms, name tags, cases of letterhead and so much more. The waste of throwing all of these items away would be enormous, and for a conservation organization like the Sacramento Zoo, this was not an option!

During the planning phase of the rebrand, a small team of passionate zoo employees joined together to find creative solutions to keep as much out of the landfill as possible. The recycle/rebrand project was born! A coordinated effort was developed with the roll-out of the rebrand that began with the enthusiastic collection of the now out-of-date items, followed by an extensive repurposing plan.

Figuring out what to do with uniforms that had the old logo proved to be the first challenge. Sweatshirts were cut into sections for animal bedding and donated to a local wildlife rescue, t-shirts were cut up for use as rags and polo shirts are still being used in an animal enrichment public education station where visitors can braid them into ropes that are washed and given to the animals. Unworn uniforms were donated to the Wildlife Conservation Network for distribution to their partners in other countries and 403 pieces were shredded down to be recycled back into fabric. All 1,958 uniform pieces collected were repurposed down to the buttons for crafts. We even used the docent’s yellow docent fleece vests to make adorable lion pillows in the pre-K Little Peeps class!

1,339 pounds of paper products with the outdated brand could have just been recycled, but our goal was to reuse it at least once more before it hit the recycle bin! Brochures with animal photos were cut up for summer camp and visitor crafts. After the zoo name was cut off of stickers, they were used to cover logos on presentation folders that were then donated to a local school. Renewal letters and leftover brochure paper are being used for animal enrichment in the form of paper chains, and shredded paper for primates to search through for food. We made notepads, flashcard rings, notebooks and even some Christmas decorations with all that paper! In the end 74% of old branded material was repurposed or reused, and only 26% went directly into the recycle bin.

The more challenging items to repurpose were plastic name tags, stamps and signage. While 6% of the signage and vinyl sign stickers ended up in the landfill, over 3,261 square feet of vinyl and plastic signs are being repurposed and recycled throughout the zoo and beyond. The name tags turned into bedazzle-your-own tags for Zoo Teens and the stamps have been reused with new foam animal prints for camp.

Overall, the Sacramento Zoo recycle/rebrand project was a success with staff from all departments helping give items with the old logo at least one more life cycle. 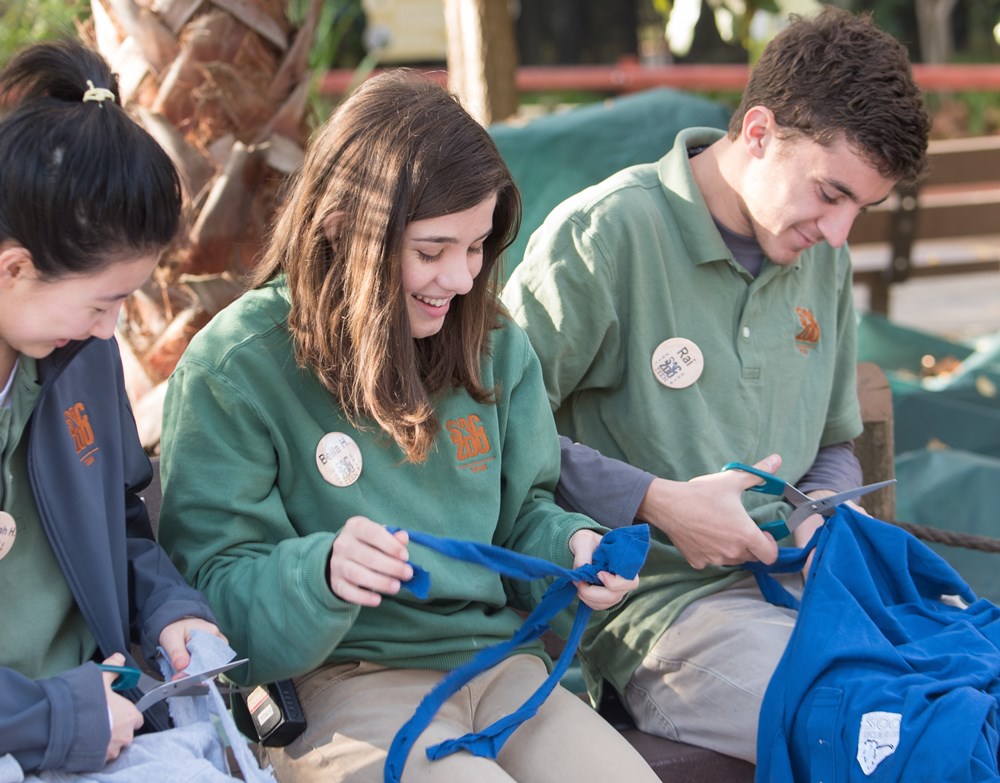 AAZK is a 501(c)(3) nonprofit volunteer organization made up of professional zookeepers and other interested persons dedicated to professional animal care and conservation. AAZK’s purpose is to foster a professional attitude in animal keepers and aquarists by encouraging them to become active members of professional teams at today’s zoos and aquariums. AAZK supports the promotion and implementation of zoo keeper education and strives to make the general public aware of our concern for all deserving conservation projects and the need for the preservation of our natural resources and the species that depend on those resources. 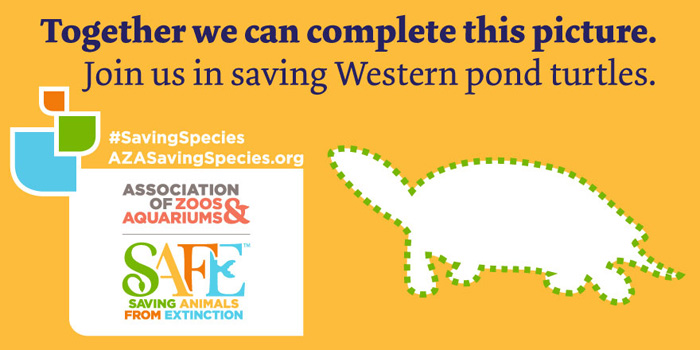 Recycle Your Ewaste or Vehicle
more

Ewaste
The Sacramento Zoo has partnered with eWaste4Good to not only properly dispose of your ewaste but to help raise funds for the zoo at the same time! They will pick up your ewaste free of charge and automatically donate part of the proceeds back to the zoo.

To find out more
Visit Other Ways to Give

Every day the Sacramento Zoo feeds pounds of browse (non-toxic branches and leaves from specific species of trees and shrubs). While we grow a lot of it on grounds, we could use your help. Many of our neighbors trim their delicious trees on a regular basis and leave the piles for curb-side collection. But, if your tree is on our list, we can collect branches from your home – or even better, you can deliver to us! – and we will feed them out to our animals, rather than sending them to a landfill.

For details, edible plant list and how to make an appointment
Visit Other Ways to Give 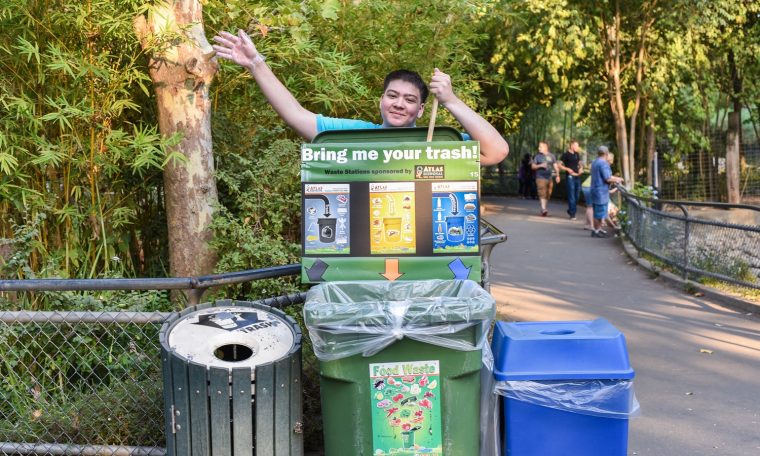